A Dozen Fall Food Events Guaranteed to Whet Your Appetite

People call Birmingham the Dinner Table of the South, and with good reason. To put it bluntly, we flat know how to eat. From soul food to James Beard award-winning fare, we do food like nobody else does food. So, it should come as no surprise that in the Fall, when the weather is just perfect, you can’t throw a soup spoon without hitting a not-to-be-missed food festival. Here are 12 that’ll get your mouth watering:

September 19-21
Birmingham enjoys rich cultural diversity. And with cultural diversity comes a steaming cultural buffet of food. Our middle-eastern food, for example, is unparalleled. And, Saint George’s 36th Annual Middle-Eastern Food Festival is a tasty opportunity for some mideast noshes. From baked kibbeh (think exotic meatloaf) to freshly made stuffed grape leaves, you’ll find all of your middle-eastern favorites. Baked chicken, falafel, and hummus are in abundance, along with tabouleh, Arabic salad, and spinach pie. Finish your entree off with any one of their nine traditional pastries. In fact, why limit yourself to one? 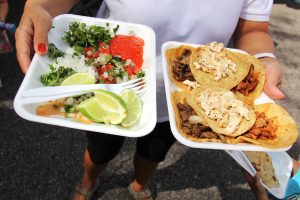 September 28
Fiesta is Alabama’s largest celebration of Hispanic culture and heritage. Since it began in 2003, Fiesta has entertained families with authentic latin food and music, along with family-friendly activities. From tortas to tacos and jerk chicken to pupusas, this fest puts on the spread. Here, you’ll find Salvadorian, Caribbean, and Brazilian food, from warm plantains, tapiocas, and quesadillas, to tamales, and corn cups. You can almost smell the homemade tortillas cooking. Come hungry.

September 28
Nothing makes us think “Alabama” better than fried green tomatoes. And if what you love about fried green tomatoes includes Fannie Flagg’s novel, Fried Green Tomatoes at the Whistle Stop Cafe, well, then you might want to check out this local favorite being held at the Shops of Grand River in Leeds this year. With live music, traditional southern food, arts and crafts, the Whistle Stop Festival is about as big a helping of Alabama charm as you could hope for. And it will definitely bring you back for seconds.

October 3-5
One of our most anticipated cultural food festivals is the Birmingham Greek Festival. In its 46th year, this event offers up many of the same delightful mediterranean dishes you might have enjoyed at St. George’s. But, here you can also choose from more traditionally greek dishes, such as gyros, souvlakia, and pastichio. Their own tempting mix of sweets include chocolate baklava, greek wedding cookies (kourambethes), butter coffee twists (koulourakia) and the big crowd pleaser—honey-soaked doughnuts (loukoumades). Opa!

October 4-5
Down here in the South, we know butterbeans go with everything. They go great with pork, other vegetables, and, as the Alabama Butterbean Festival will show you – good family fun. This down-home gathering tempts you with butterbeans prepared in all sorts of ways, and then offers you one heck of a good time. In fact, if butterbeans aren’t your jam, you might want to come anyway for 12-hours of live music, carnival rides, food, petting zoos, pony rides, and who knows what else! Held each year in Pinson, just north of Birmingham, this event has the honor of having been recognized by the Guinness Book of World Records for having the largest pot of baked beans, which, in case you’re a numbers person, held 1,010 gallons of beans.

October 6
You’ve heard of chili cook-offs and barbecue contests. Well, the Cahaba River Fry Down is a gourmet cooking competition where competitors try their hand at catfish. Here, you might find anything from curried catfish with lime chutney to Thai grilled catfish salad, to crunchy catfish tacos with homemade salsa. And there will definitely be a team or two with traditional fried recipes for you purists out there. Each team serves up their fare in abundance to visitors along with side dishes ranging from salads to fried Snickers bars. A panel of professional judges evaluate the efforts of the visiting chefs (both amateur and professional) and awards are given at the end of the day. Don’t expect to want any supper that night. You won’t leave hungry.

October 6
Benefiting Community Grief Support, a non-profit organization that provides free compassionate counseling, education, and support for bereaved persons, the Magic City Mac n Cheese Festival is exactly what it sounds like: an incredible opportunity to get your Mac n Cheese fix. This year, the second of this festival, some two dozen local restaurants will descend upon Brookwood Village intent upon tempting you with their versions of this decadent southern delicacy.

Trucks By The Tracks 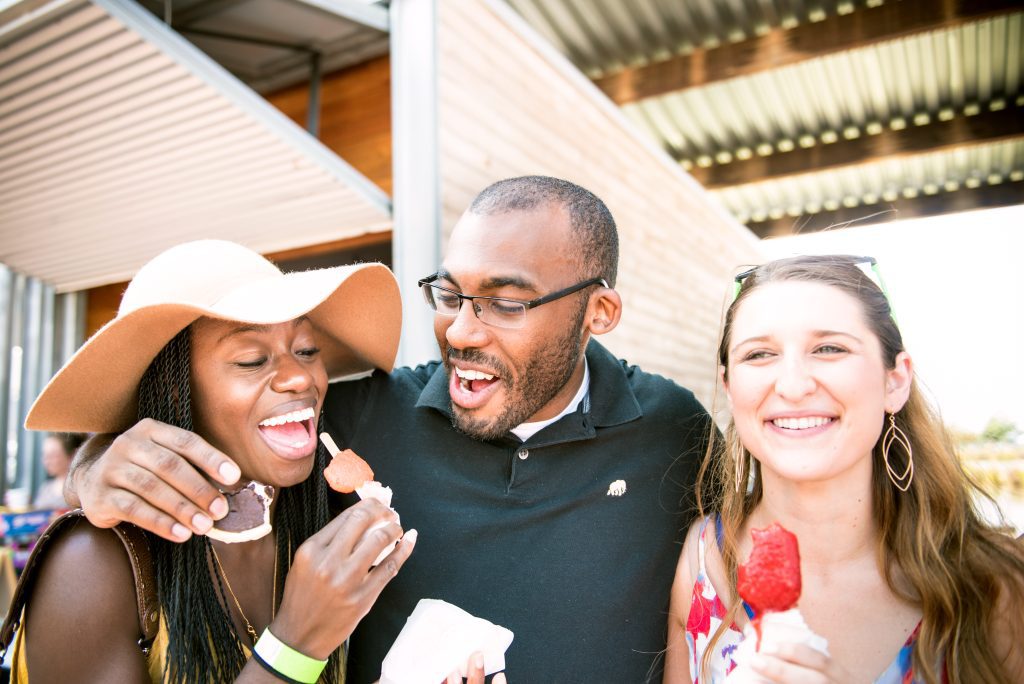 October 13
Every year thousands of folks gather at Birmingham’s signature Railroad Park to sample culinary delights served up by our thriving food truck culture at Trucks By The Tracks. When we say there’ll be something there for everybody, we’re not just blowing barbecue smoke. Enjoy po’ boys, gourmet grilled cheeses, Nashville-style hot chicken, and street tacos. Yes, there’ll be barbecue, as well as Chicago-style pizza, big juicy burgers, and about anything you could want made with bacon. If your sweet tooth is acting up, enjoy homemade ice cream, gourmet popsicles, or warm baked cookies. With temptations enough for everyone’s tastes and live music, this won’t be just another walk in the park – it’ll be a party!

October 20
Begun by the Birmingham Originals, an organization of many of Birmingham’s favorite restaurants, Breakin’ Bread brings together more than 30 of our favorite restaurants at the historic Sloss Furnaces in an excellent showcase of food, beer, and wine. Named a “signature experience” by the Alabama Tourism Department, Breakin’ Bread is counted one of the top 10 attractions in the state. While you’re there, you’ll definitely want to wander through the 135 year old iron mill, its preservation a testament to Birmingham’s genuine care for our history.

October dates TBD
In celebration of Birmingham’s incredible foodscape, Eat Drink Read Write brings together Birmingham’s cuisine from local chefs and learning experiences in a three day celebration of healthy food and interesting interactive experiences. Learn how to garden on your patio, what motivates our local chefs, and how social media affects the food scene. If you like feeding mind and body, you’ll want to attend this series of events. 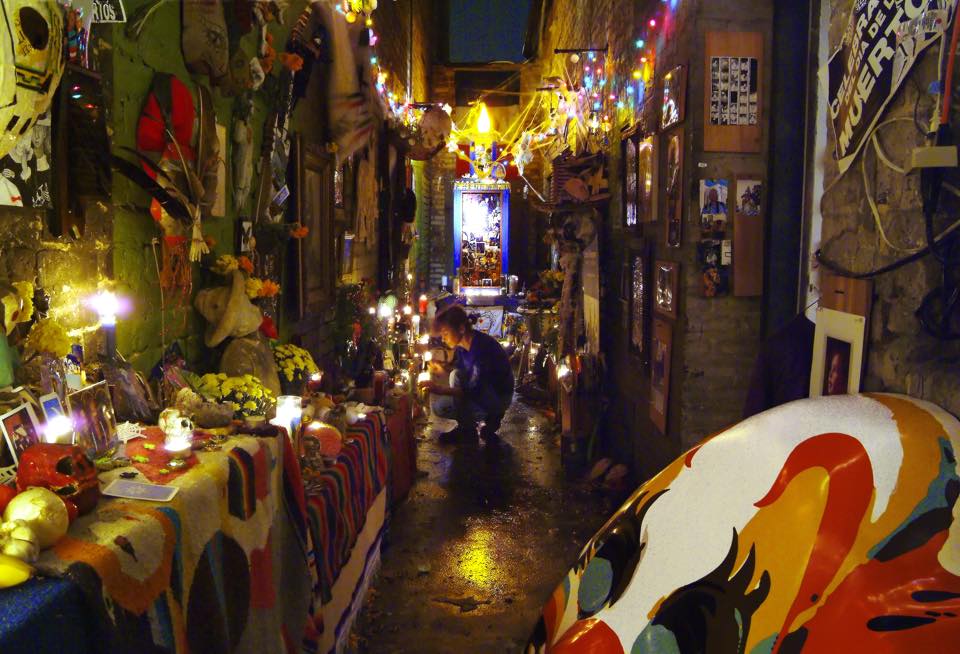 November 2
What began as an artistic homage to famed Civil Rights photographer, Spider Martin some 15 plus years ago, has grown into a celebration of life that takes up several city blocks and draws people from all over. More importantly, Día de los Muertos traces its Birmingham culinary roots to the involvement of local chefs such as Franklin Biggs and the late Guillermo Castro. This colorful and magical event has developed into a showcase of all sorts of latin delicacies from the traditional colorful sugar skulls called calaveras, to pan de Puerto (bread of the dead), to much, much more. With all sorts of activities in addition to the food: music, face painting, reverence, and revelry, this colorful and fascinating night is an excellent evening activity for the whole family.

November 2-3
Traditionally held early in November in the neighboring town of Brookside, Alabama, the St. Nicholas Slavic / Russian Food Festival offers up delightful dishes from faraway lands. You can stick with the familiar, such as kolbasa and kraut, or you can be adventurous and try shchi (a cabbage and meat soup), holupki (stuffed cabbage with beef and pork), or halushki (potato dumplings with cheese and onions). The dishes are all prepared from recipes handed down from relatives and friends who immigrated to Brookside from Russia, Ukraine, and from the region now known as Slovakia. After having your borscht and borodinsky, you’ll want to enjoy a kolachie for dessert and take a tour of the remarkable St. Nicholas temple. You’ll find it a beautiful way to top off a fall full of festivals.