Barbecue in the Ham: The Top 15

It’s summer in the South, a time when we all turn out thoughts to one of the only truly American foods – barbecue. If you ask any Southerner about barbecue and they’ll have an opinion. A strong one. Aficionados of Carolina-style barbecue swear by a vinegar-heavy, thin sauce. Texans will argue that folks from the Southeast don’t know squat about cooking brisket, and those of us on the other side of the Big Muddy will point out that those same Texans wouldn’t know a properly cooked pork butt from their own. Some like a white sauce of the style that originated in the northern part of our fair state. Some prefer a peppy red sauce. Some like it sweet; some like it hot. Some opt for a dry rub while others prefer to inject the meats in their smokers with proprietary blends that enhance the juiciness of the meat. Bottom line, there are about as many opinions about barbecue as there are barbecue places. And, here in the dinner table of the South, we’ve got a bushel of them to check out.

So, we’re here to tell you about the 15 joints that repeatedly make folks’ lists of delectable barbecue places in Birmingham, and to ask your forgiveness if we’ve left your particular favorite off the list. So, with no further ado, and in no particular order, here they are: 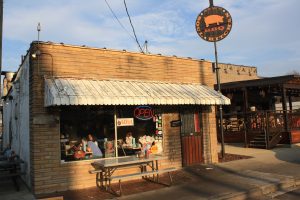 Mike Wilson opened the first Saw’s location in Homewood in 2009. Since then, he’s added several other locations, and they’re all slightly different. Saw’s fans will all have their favorite location and favorite dish. That said, if we were to recommend a single Saw’s dish to try, it would have to be their signature pork and greens: a generous portion of cheese grits stacked with succulent barbecued pork, collard greens cooked just the way your Meemaw cooked ‘em, and a tangle of thin-sliced fried onion rings. 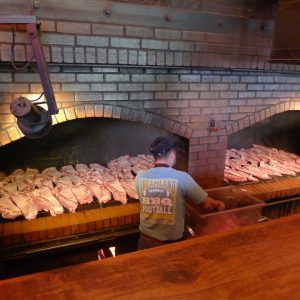 In 1958, rather than open a mortuary as a second job to support his family, John “Big Daddy” Bishop decided instead to open the original Dreamland Café just south of Tuscaloosa. No kidding. Those were his options. So, instead of burying folks, he figured out how to cook ribs to die for. When they say “there ain’t nothing like ‘em, nowhere,” they’re not just blowing smoke. Once you’ve had your finger-licking fill of perfectly cooked ribs, served up old-school with slices of soft, white, Sunbeam bread, and topped off with some Chocolate Dream or nanner pudding (that’s Southern for banana pudding, and it’s a work of art in and of itself), you’ll know why readers of Southern Living magazine selected Dreamland as Alabama’s Best BBQ Joint in 2018.

In 1985, Nick Pihakis and his father, Jim, opened the first Jim ’N Nicks Bar-B-Q in what had once been a pizza joint on Clairmont Avenue. Since then, with a reputation for an excellent offering of scratch-made Southern fare, meats cooked low and slow, and impeccable service, the business has grown into a national presence. Their pulled pork is beyond reproach, but, if you’re in the mood for something different have a go at their grilled catfish or smoked turkey breast. You’ll find the cheese biscuits utterly addictive. Finish the meal with homemade coconut pie and don’t let yourself feel even the slightest tinge of guilt.

Every morning at 3:00 A.M., while the rest of us are still lying in the warmth of our beds, the pitmaster at Bob Sykes is loading a hickory-fired pit with pork shoulders. That’s the way it’s been done since Bob and Maxine Sykes opened for business in 1957. Their sauce is legendary. Their barbecue has been lauded in countless articles all over the country. And their lemon icebox pie is to die for. So, if you aren’t headed to your car to head to Bob Sykes already… well… what are you waiting for?

Since 1953, Johnny Ray’s has been pit smoking pork, chicken, and beef the same traditional way. Low, slow, and then ready to go. A Johnny Ray’s pork sandwich and an order of their hand-battered onion rings (a.k.a. “wedding bands”) and you’ll find yourself – pardon the pun – in hog heaven.

In 1981, Gus Kanellis and his wife, Maria, opened Costa’s in the Roebuck Huffman area of Birmingham. Seasoning their meats with a proprietary blend of Greek spices that remains a secret to this day, and slow cooking over a 375-degree fire, they have produced some of the finest barbecue that can be found. Pair that delicious slow-cooked pork with sides (or “fixin’s” as we say down thisaway) like slow cooked collards, green beans, macaroni and cheese, and you’ve got yourself a little slice of barbecue heaven.

Michael O’Conner channeled his Cajun roots when he started slow cooking pork butts for a select lucky few friends and family members. What started as hospitality grew into a business. Finally, in 2016, Michael along with his wife, Michelle, opened a brick-and-mortar location on Hiway 31 in Hoover. Here they offer up a delicious mix of cajun fare such as Cajun potato salad with Creole mustard, and Memphis-style dry-rubbed pork barbecue. And if that doesn’t suit your fancy, go in for a muffuletta sandwich, or “the Pirogue,” a 100% Kobe beef hot dog served up on Gambino’s French bread. Hoooo boy!

Opened by the Carlisle brothers in 1945 after their return from serving overseas, Carlile’s (so spelled because one of the brother’s had had his name misspelled by the Armed Forces, and they liked that spelling better for the restaurant), has been serving up slow-cooked barbecue and comfort food ever since. Only open for lunch as of this writing, Carlile’s still operates out of the same building it opened in. Some barbecue aficionados will tell you that a pit develops a seasoning over time, a build up of flavor that is imbued in the meats cooked within its walls for ever after. One bite of Carlile’s barbecue will confirm that theory.

No-nonsense, down-to-earth, and downright delicious, Rib It Up is one of those little hole-in-the wall gems where perfectly cooked barbecue paired with your choice of traditional southern vegetables is all you could ever hope for. Be sure not to pass on the crackling muffins.

In a way, Rusty Tucker exemplifies Birmingham food. Here’s this barbecue whiz who is a Johnson and Wales-trained chef, but who chose barbecue as his palette over fine cuisine. It’s not that he doesn’t know how to deliver an elite, upscale dining experience. Rather, he chose barbecue because of its appeal to everyone. And Rusty’s barbecue, believe you me, appeals to everyone. Employing a sauce recipe handed down through the generations of his family, Rusty takes pride in serving up slow-cooked, hand pulled pork to his raving following. Grab a pork sandwich from Rusty’s and the first thing you’ll notice is that the pork isn’t shredded; it’s broken apart. Bigger succulent pieces make Rusty’s sandwiches a nice change to the standard pulled pork approach.

Opened in 1891, Golden Rule is the oldest continuously running restaurant in Alabama, and the sixteenth oldest in the country. The folks at Golden Rule have forgotten more about the art of slow cooking pork than many of us will ever know. While they offer up smoked chicken, turkey, hamburgers and the like, we highly recommend a pulled pork sandwich and either their hand-cut fries or a loaded baked potato. And, while the Golden Rule has expanded with locations throughout the Southeast, we’re partial to the original one in Irondale, or the one on Highway 31 in Hoover. Bottom line: you’ll be hard pressed to find better barbecue anywhere in the South than at the Golden Rule.

What happens when three University of Alabama college buddies get together 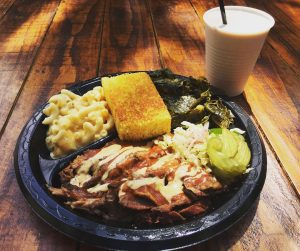 and learn to fire roast meats from a local barbecue legend by the name of Moses Day? You get Moe’s Original Bar B Que. That’s the short version of how Jeff Kennedy, Ben Gilbert and Mike Fernandez ended up creating one of the finest barbecue chains to originate in Alabama. Now with 60 locations all over the country, these three Bama boys have developed a consistent and loyal army of followers. Slow-cooked over fruitwoods, Moe’s smoked pork, turkey, and chicken reflect the art of a master passed on to attentive apprentices. Round out your meat selection with appropriate southern-style trimmings and we can just about guarantee you’ll become a card-carrying member of the Moe’s army.

When we think of Demetri’s we just can’t decide which is better, their breakfast (voted one of the 101 best in the country by Playboy magazine, according to their website), or their barbecue. But, since we’re talking smoked meats here, we’ll skip the scintillating descriptions of eggs, bacon, hot biscuits, grits, and the like. Since 1961, Demetri’s has been serving up their own recipe of Alabama barbecue to a devoted following. Classically Alabama-styled, but with Demetri’s proprietary blend of seasonings, their barbecue is mouthwateringly slow-cooked and hickory-smoked. Finish off your plate with fried okra or wood-fired veggies and you’ll be coming back for more.

In Full Moon BBQ, Brothers David and Joe Maluff have created a group of barbecue joints that easily stand among the titans of the smoked meat world. The smoke from their hickory-fired pits sings a siren song to the hungry commuter whenever you find yourself within range. While they are known for their exquisitely smoked pork, turkey, and chicken, they are equally famous for their vinaigrette slaw and half moon cookies – both dishes that made the list of the “100 Dishes to Eat in Alabama Before You Die.” You’ll also want to be sure to try their chow chow – a traditional piquant relish that adds a zip and crunch to a barbecue sandwich.

Miss Myra Grissom Harper’s barbecue is some of the finest in the South. But, hey, don’t take our word for it; have a look at what food celeb Andrew Zimmern has to say about it. Slow cooked over hickory smoke in a custom-built pit, Myra’s barbecued meats are spectacular. Top off your choice of meats with turnip greens, baked beans, or maybe some homemade deviled eggs and tuck in. This highly acclaimed barbecue joint is not to be missed as you plan your barbecue tour of the Ham.

So, there you have it: 15 of the finest barbecue eateries in existence, and all close enough to Birmingham that you can almost smell the smoke downtown. But, here’s the deal: Alabama is most definitely the nexus of this singularly American food and Birmingham is at its center. So, if you love barbecue, we recommend making a trip out of it. With Birmingham as your center of operations, you can easily try out many of the other great barbecue joints that are but a day trip away: Archibalds in Tuscaloosa (a favorite of the Bear), Leo & Suisie’s Famous Green Top Bar-B-Q in Jasper, and Big Bob Gibson’s BBQ in Decatur, to name just a few. In the meantime, take a lesson from the pitmaster: low and slow… a great way to cook your meats and not a bad philosophy for living.