The Comprehensive Guide to Birming-hamburgers

Sometime between about 1890 and 1905, an inventive cook somewhere in the United States put a piece of Hamburg Steak (which was already a thing) between two pieces of bread and called it a hamburger. We’ve been in love with it ever since. If you had to choose one food that Americans can’t resist, the hamburger would be it. And no city is worth its seasoned salt unless it sports an outstanding selection of this truly American sandwich.

In doing our research, we found no fewer than half a dozen different organizations – from our own AL.com to the trip apps like Yelp, Trip Advisor, and Tomato – that had rated the burgers of the ‘Ham. Here, we’ll do our level best to give you a comprehensive overview , from the fanciest to the most basic. In an attempt to catalogue most every ‘Ham burger worthy of mention, we’ve divided them up into four basic categories: the Fancy Pants Burger, the It’s-what-we-do burger, the Dive Burger, and the Furiously Fast Burger.

Chez Fon Fon
The burger at Chez Fon Fon is legendary to locals. Birmingham’s culinary godfather, Chef Frank Stitt takes hormone-free, all-natural chuck shoulder shipped in from Colorado, grinds it in house, forms it into generous patties which he then cooks over open flame to your taste, tops it with a slice of Comté cheese, enough romaine lettuce to give you green-leafy-vegetable cred, some grilled red onion, then situates the whole affair between the loving halves of a brioche bun. Très délicieux!

Flip Burger Boutique
Noted in all six of the rating entities we consulted, Flip Burger bills itself as “a modern burger boutique.” From its menu to its setting, to its decor, it lives up to the moniker. Here, you can enjoy everything from an Angus beef burger dressed for the ball with bleu cheese, soy truffle vinaigrette, frisée, pickled shallots, and red wine jam, to a bison burger, to a “veggie” burger made with chickpeas. If you’re feeling the urge to splurge, have them whip you up one of their absolutely decadent Krispy Kreme Donut milkshakes.

FoodBar
Starting with a half-pound of grass-fed beef from right here in Alabama, Chef George McMillan grills it to order, then tops it with a caramelized onions and, in a calculated twist on the cheeseburger, a parmesan crisp. Pair it with a Kentucky Ryeder, which features Bulleit rye, lemon, St. Germaine, and vanilla, and you’ve got yourself a meal fit for a modern day cattle baron. 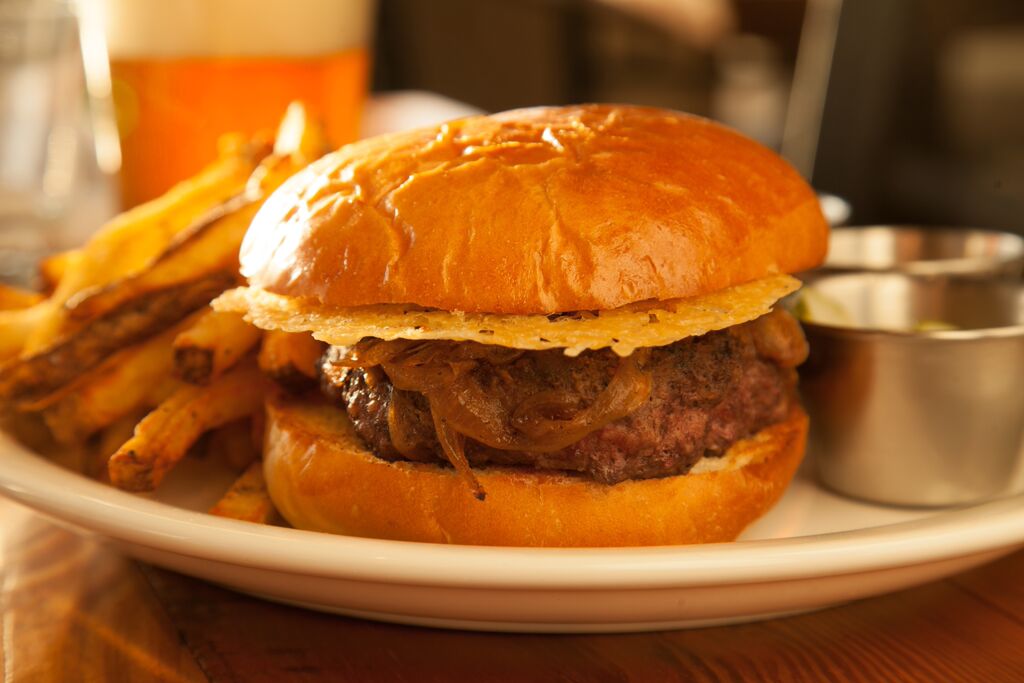 Baha Burgers
Baha takes particular pride in the fact that their USDA certified Angus beef comes from family ranchers right here in the good ol’ U.S. of A. They take this quality beef and serve it up any number of ways ranging from the classic burger – topped with the expected condiments, lettuce, tomato, onion, and pickles – to the Baha Beef Burger – topped with pineapple, pepper jack cheese, and chipotle barbecue sauce on an onion bun. Not into beef? Try any of a number of other burgers ranging from turkey, to salmon, to lamb, to mushrooms.

The Craft Burger
A relatively new addition to the Birminghamburger community, The Craft Burger takes particular pride in keeping it simple and affordable. Fresh ingredients, simply combined are the order of the day at this family-friendly burger joint. And for all you non-burger-eating folks, check out their salad which (as you might expect) features simple garden ingredients you can top with chicken should the mood strike.

Farm Burger
Farm Burger, having embraced the farm-to-table movement, brings together a community of farming partners, butchers, and their own team of chefs to deliver fresh seasonal offerings. Their grassfed, locally raised, antibiotic + hormone-free beef is ground fresh and served up in any number of ways from the addition of all of the expected burger trimmings to exotic additions such as oxtail marmalade, gruyere cheese, and pork belly. You can also sink your canines into a vegan version made with black eyed peas, smoked tempeh, and butternut squash, a pork version, or a chicken version. Top off the meal with some kale salad and a local craft brew and it’s smack-your-mama good.

Twisted Root Burgers
If variety is the spice of life, this is one spicy burger joint. At Twisted Root, you can have your burger in all kinds of ways and with all kinds of meats. On any given day, you might find them serving up a burger made in part with anything from elk to emu, should you choose to explore your deeply embedded carnivore. Or, if you prefer, you can have a good veggie or turkey burger

Five Guys Burgers
No burger restaurant list is complete without mention of this growing chain. The Five Guys small burger is enough to satisfy a grown man and everything else is just as substantial. Fresh potatoes shipped in daily are converted into fries, the portions of which are incredibly large, and their burgers are solid, constructed to order, and guaranteed to satisfy.

Jack Brown’s Beer & Burger Joint
Recently voted Birmingham’s best, Jack Brown’s offers up a series of compact burgers made with Wagyu beef and a broad selection of beers with which to pair them. Aficionados love the dive-like atmosphere, weekly tap takeovers, and loyalty program carefully disguised as a beer drinking challenge: drink 100 different beers and you become a “notcher” and are given your very own embroidered, 100-beer notch club shirt.

Hamburger Heaven
A Birmingham institution since 1982, Hamburger Heaven has made a name for itself by consistently offering up heavenly burgers. This is your no-frills, down-and-dirty hamburger joint. Don’t come here looking for fancy mayonnaise (what the cool kids call aioli), or kale salads. But, if you’re in the mood for an old-school hamburger and fries, you have found your destination.

Tip Top Grill
Offering far and away the best view of any burger joint in Birmingham, you’ll find the Tip Top Grill located on Shades Mountain overlooking the valley. This is the perfect little hole in the wall for classic drive-in fare from breakfast sandwiches and hotdogs to, of course, hamburgers. If the burgers were awful (and they are every bit the opposite of that!) we’d still recommend eating up there if just for the scenery.

Paramount
As much bar and hangout as restaurant, the Paramount combines old-school arcade machine fun with an eclectic menu that, in addition to salads and unexpected dishes such as boiled peanut hummus, offers a handful of sandwiches that can either be constructed as  hotdogs or hamburgers. Of note is the Paramount Burger, which features two patties, corned beef, a fried egg, two kinds of cheese, pickles, crispy smashed risotto, garlicky mayo, and barrio hot sauce. Oh my! 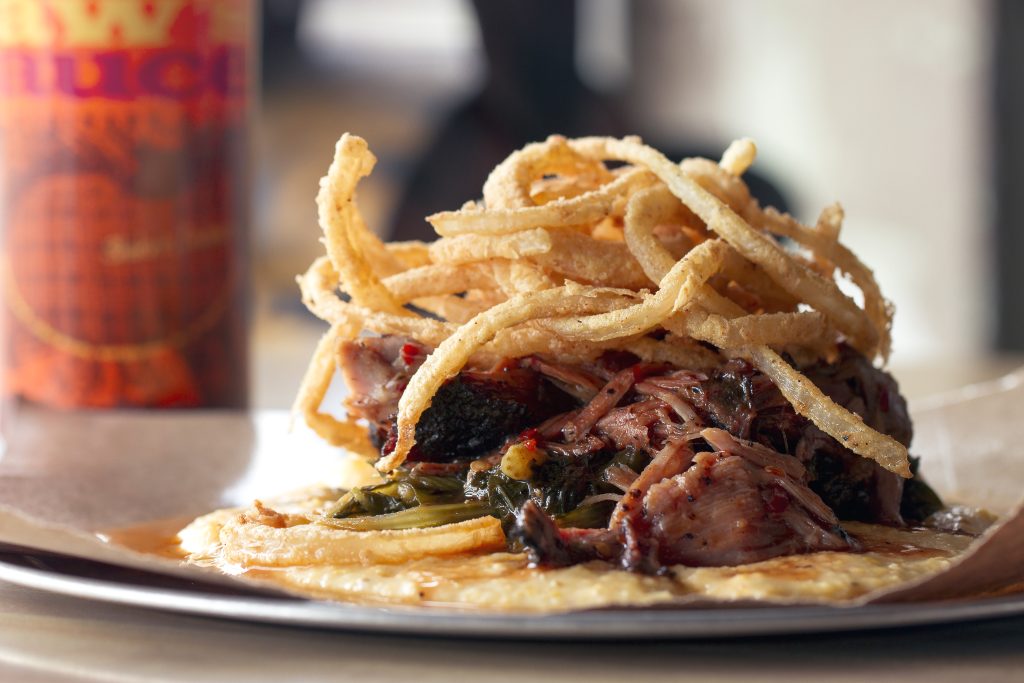 Saw’s Soul Kitchen
While anybody who’s been to Saw’s will tell you their signature dish has got to be the pork and greens, their burger is nothing to turn your nose up at. In fact, the Saw’s Carolina burger with pickles, mustard, onions, chili, and slaw, is a thing of burger beauty. While you’re in the neighborhood, you may must find that you have to visit Avondale Brewing for one of their craft brews. Just sayin’.

We would be remiss if we didn’t draw attention to the two burger chains that found their humble beginnings right here in the ‘ham.

Milo’s Original Hamburgers
The Milo’s burger is an unexpected hot mess. Sporting a proprietary sauce created by Milo Carlton in the ‘40s, fresh onions, cheese, on a grilled bun, the Milo’s original burger is a unique and saucy experience. If a traditional burger is what you prefer, don’t ask for the Milo’s burger. Just tell them you want it “the other way.”

Jack’s
The first Jack’s opened in 1960. Now, the Jack’s footprint covers the Southeast and is 160 stores strong and still growing. For a classic drive-in burger made the way they used to be: by hand and with fresh ingredients, Jack’s is your destination.

Mooyah
A chain with locations in almost 20 states and 8 different countries (they must be doing something right), and was mentioned in half of the sources we consulted.

The Standard
Located in the Pizitz Food Hall, this compact little operation turns out some exceptional burgers. Pair a hot burger and tots from here with a craft cocktail at The Louis and you’ve got yourself a little slice of heaven.

Chris Z’s
This is one of those holes in the wall that are often overlooked. A small little joint on the edge of Lakeview, Chris Z’s has several burgers that will grab your attention and satisfy that rumbling you’ve got that only a burger will take care of.

Hotbox
Known for their Asian fusion creations, Hotbox has one burger to offer, but with its bacon jam, pickles, and cheese, it competes well with other burgers in the neighborhood.

Fancy’s on Fifth
Oysters and burgers are what they do. While the menu only sports a few burger options, it’s always worth the trip to see what the Chef’s creation of the week is. Pair a burger with some truffle fries and a local craft brew and you won’t regret it!

Melt
Located in Avondale where you will also find Fancy’s on Fifth, Hotbox, and Saw’s Soul Kitchen, Melt takes classic food and gives it a twist. Their burger offerings are definitely worth discovering.

Not to be Forgotten

It’s safe to say that more restaurants offer a burger than don’t. While we can’t call out all of them, here are a few others you might want to look into in no particular order: