Three Reasons to Bring Your Game to the Magic City

If you really love baseball then you probably know that if you really want to see the game played with passion you watch the minor league games. These are the guys for whom ending a game with a clean uniform is a sign of failure, who lay awake at night and imagine what it would be like to stand in the batter’s box at Fenway, or snag one from just above the ivy at Wrigley. Now, if you really, really love baseball and have an appreciation for its history, you owe yourself a visit to Birmingham. Here are three reasons:

From 1885 to 1910, the Birmingham Barons and Birmingham Black Barons alternated playing in a small park appropriately named “Baseball Park,” but equally appropriately called “the Slag Pile.” A young, entrepreneurial 20-year old by the name of Rick Woodward owned the team at the time. He grew tired of having people watch his team (then called the Coal Barons) while perched upon heaps of industrial waste in the outfield and designed and built Rickwood Field in 1910 on the west side of Birmingham where it stands to this day. Rickwood is the oldest remaining ballpark from the earliest days of baseball. Legendary hall of famers have run the bases there, Ty Cobb, Christy Mathewson, Honus Wagner, Babe Ruth, and “Shoeless” Joe Jackson, to name but a few. 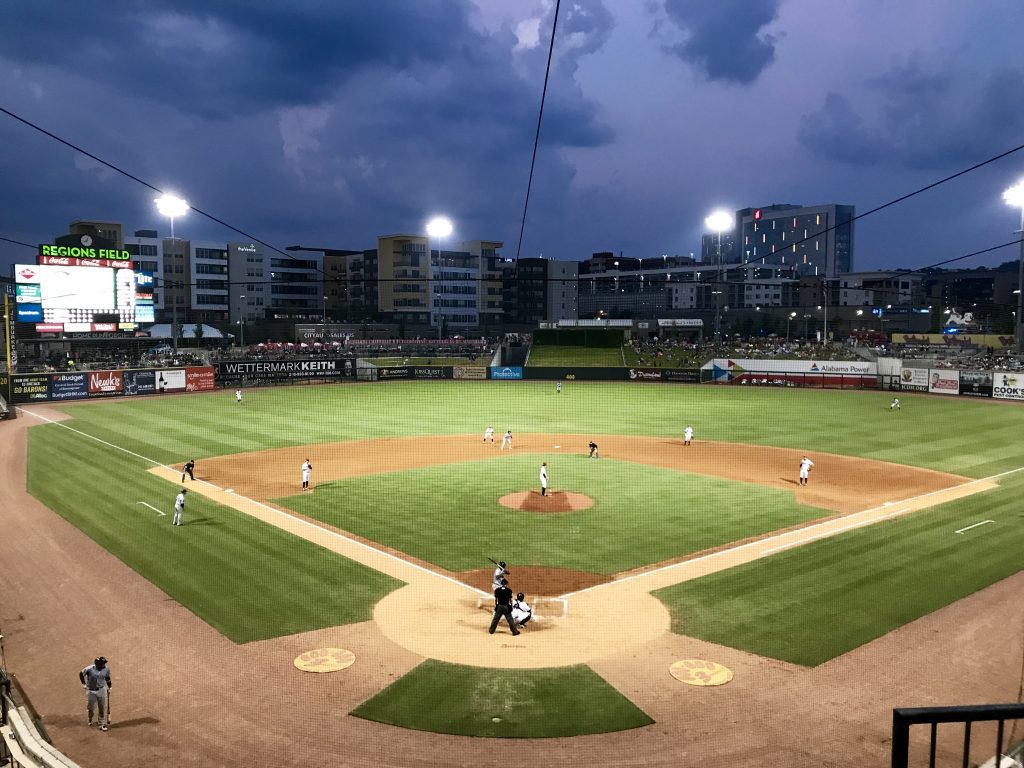 As glorious as Rickwood is, Regions is equally glorious – just in a different way. Rickwood was the home of the Barons for 77 years. In 1987, the team moved its home to a newly built park in the bedroom community of Hoover, south of Birmingham, where it stayed for two decades. Then, in 2009, Corporate Realty Development proposed to build a new home for the Barons in the heart of the city of Birmingham, adjacent to the newly constructed Railroad Park.

The design of this delightful ballpark pulls together brick and steel – a nod to our city’s industrial past – and, in homage to the history of the Barons’ early beginnings at the Slag Pile and Rickwood, incorporates elements inspired by Sloss Furnaces and Rick Woodward’s original field. The resulting design is an exquisite gem of a baseball park. With the playing surface sited 16 feet below street grade, one walks into the park level with a 360° concourse that allows visitors to see the action from pretty much everywhere. Along the concourse, visitors find an assortment of concessions ranging from local beers and barbecue, to Mexican fare, to the old standbys: hotdogs, peanuts, popcorn, and Cracker Jacks. As of this writing, almost four and a half years after Regions Field first opened, the Barons still play their home games to a packed house.

Reason #3: The Finest Baseball Museum This Side of Cooperstown

Overlooking left field at Regions, you’ll find a gorgeous two-story, 15,750 square-foot building that pays homage to the greats who’ve played America’s past time, both here with the Black Barons and elsewhere. Its mission is to present the history of African-American baseball in an unsurpassed manner, and the Negro Southern League Museum does so with panache.

In 1920, expats from the American Cast Iron Pipe Company’s industrial league baseball team, formed the Birmingham Black Barons as part of the inaugural season of Rube Foster’s Negro Southern League. Alternating home stands with the Birmingham Barons, (and often drawing larger crowds) the Black Barons alternated back and forth between the Negro Southern League and the Negro National League, (which served as a major league for the black players), before finally settling into the Negro National League for good. Their contribution both to the game in general and Birmingham’s love of the game in specific cannot be overstated.

At the Negro Southern League Museum,  you’ll find exquisite displays with remarkable bits of preserved history. Here, you’ll find worn game uniforms from Satchel Paige, a young Mobile pitcher known for his showmanship and legendary control (and thought by some to have been the greatest pitcher of all time). Here, on display is “Big Bertha,” the bat of Louis Santop (the first great power hitter in Negro League Baseball), 1500 original signed baseballs, and a baseball contract from 1907. You’ll find an exhibit on Jackie Robinson, who broke the color barrier in 1947, artifacts from when the “Say Hey Kid” Willie Mays first got his start with the Barons, and an exhibit on the more recent phenom, Bo Jackson.

Unbeknownst to many, the Negro Southern League Museum also houses the Center for Negro League Baseball Research. As such, it houses an incredible archive of memorabilia, photographs, contracts, the likes of which you’ll not find elsewhere. No serious study of America’s pastime, Civil Rights, or black athletes can omit a visit to this hallowed museum. Here, a love of baseball and a deep appreciation for the men who played it is made manifest in a place that truly honors the history of these athletes who played the game back when people would sit on a slag pile just to see it played well.