If you take a notion to try some local brews, this trail’s for you. Travel along with your imaginary host, Jammin’ Jim, to some of his favorite taprooms and watering holes.  Jim loves nothing more than a cold snort of craft beer.  Come follow his trail.  And remember to Uber when you drink.  It’s the smart and safe thing to do. 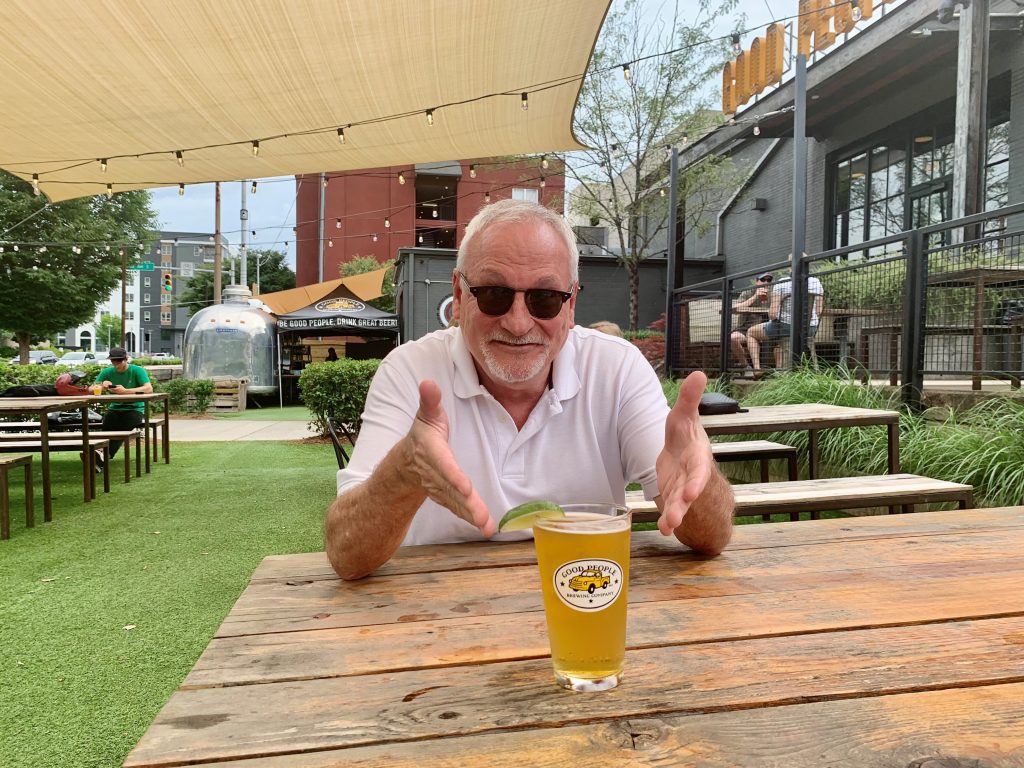 Located in Birmingham’s burgeoning Parkside District, Good People has some of the highest rated beers in the Southeast.  And with interesting names.  Jim advises trying Snake Handler or The Muchacho. Named Best Craft Brewery in Alabama by Eat This, Not That!

Avondale Brewing Company
201 41st Street South   35222
Avondale Brewing is housed in an historic building in the heart of the Avondale entertainment district.  Stop by for beers in the taproom and watch them craft delicious brews.  Try samples of the latest and greatest.  Here, you can learn the story of the famous beer-swilling elephant, Miss Fancy.

Cahaba Brewing Company
4500 5th Avenue South   35222
Jump into this spacious taproom named for the Cahaba River that flows nearby. The brewery is open seven days a week for your thirst-quenching pleasure.  With more than 26 taps, this is one of Birmingham’s favorite gathering spots, serving up staples like Blonde, Oka Uba, Pale Ale, and Lager.

Ghost Train Brewing Company
2616 3rd Avenue South   35233
Jim says there’s no need to fear.  Blondes, ciders, hoppy, darks and more are on the menu at Ghost Train.  For those looking for something other than beer, the brewery also serves margaritas and other cocktails to tempt taste buds.

Birmingham District Brewing Company
2201 2nd Avenue South   35233
With more than 20 years of brewing expertise, the brewers here are dedicated to creating better and bolder beer.  While keeping up with beer trends, they also strive to produce unusual brews that keep Jim and other patrons returning time and again.

Back Forty Beer Company
3201 1st Avenue North   35222
This innovative brew team offers a variety of American and European craft beer styles, all brewed on-site and served fresh.  With as many as 25 different options on tap, the brewery also serves a creative menu of gourmet pub foods. 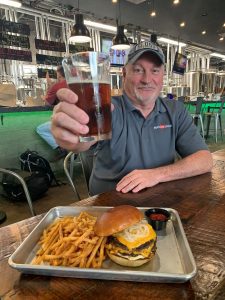 True Story Brewing Company
5510 Crestwood Blvd.   35212
Live music accompanies the pleasures of beer on draft at this friendly neighborhood brewery.  Interesting beers are brewed in-house with additional rotating guest taps.  They also have a good menu of pub foods.  What Jim likes is their beer served up alongside pinball, billiards, foosball, and board games.

Ferus Artisan Ales
101 Beech St., Trussville   35173
It’s well worth it to venture out from the city to the community of Trussville to explore this brewpub and restaurant.  As their name suggests, they take pride in their wild and unusual sour beers, along with crisp pilsners, flavored stouts, and barrel aged beers.  Jim likes to hop forward with their IPAs. There’s also a great adjoining area to catch some free live concerts and movies on the big screen while you sip. 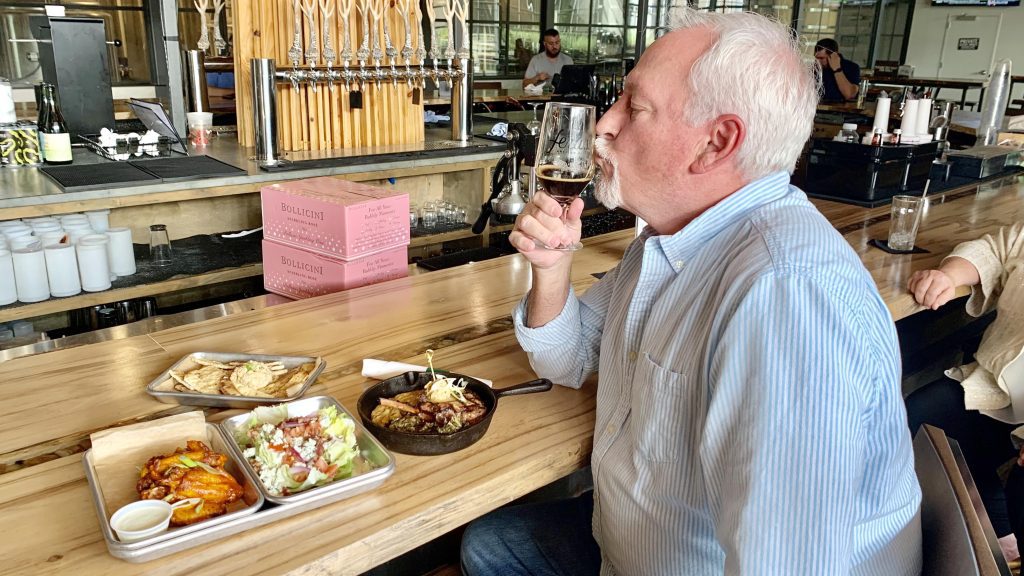 The Grocery Brewpub
2823 Central Avenue, Homewood   35209
Good food and great brews are the attraction at this brewpub in the Birmingham suburb of Homewood.  Taco Tuesdays pack the house, and a beautiful lineup of drafts on tap are enjoyed along with frequent live music.

Monday Night Brewing
14 12th Street South   35233
Monday Night Social Club serves more than 25 brews on tap, including house-made beers, small batch IPAs, barrel-aged and sour beers, and guest taps from other local breweries.  Had your fill of beer?  They also have a full bar with wine and cocktails.  Jim goes there for the Fast & Furious references.

Brock’s Gap Brewing Company
500 Mineral Trace
Hoover 35244
Jim says that sometimes you want to go where everybody knows your name.  This is the family-friendly place where neighbors gather to sing TV theme songs and enjoy the added attraction of food trucks. 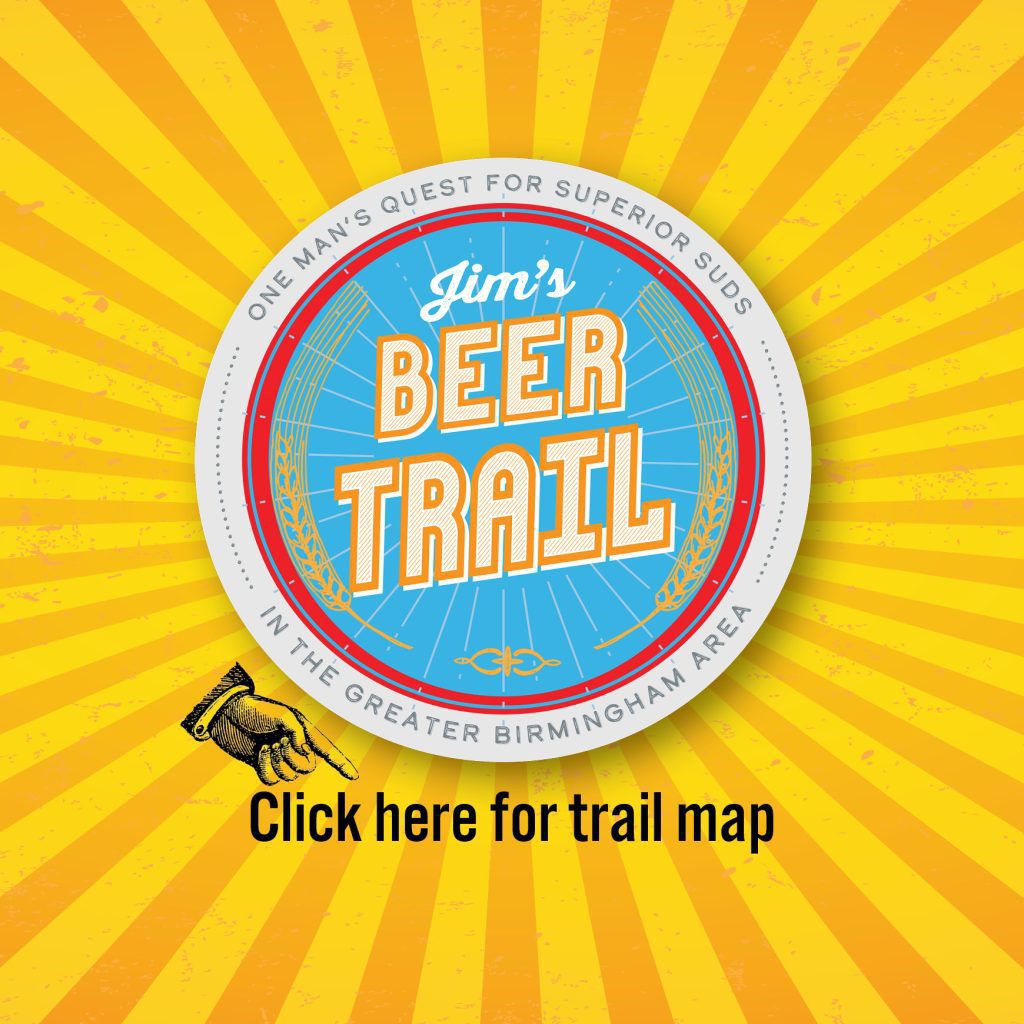